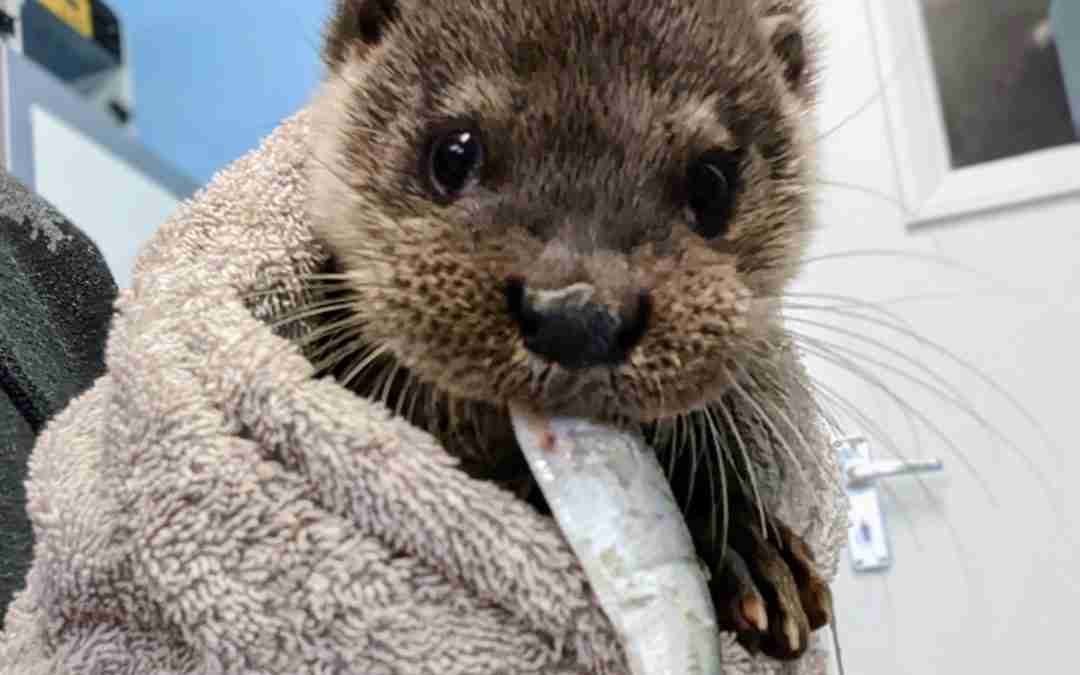 A telephone call from a Badger Group made us aware of a lactating otter being found dead on the road on a Friday. In the same way as they would start searching for badger cubs, the members were out talking to people and asking if any cubs had been seen or heard. A member went to check on the dead body the next day and saw a cub by its mother, but it ran away as soon as it saw her.

We suggested that they kept monitoring the dead otter and to try and catch the cub as otter cubs are reliant on their mother for the first 15 months of their lives. Armed with a net this time, the following day the cub was again by its mother and this time, was caught with the net and some very thick gloves! The little cub was only 6 – 8 weeks old and was taken to one of the rearers in the county who had done badger cubs many times before. Despite the spitting and warning sounds the little female cub took milk from a syringe and settled for the night.

Our Wildlife Release Co-Ordinator, Charlotte, drove to collect the cub the next morning with disturbing news of two further cubs being seen on a golf course nearby. On arrival, the cub was in good condition and keen to take more milk. It doesn’t seem possible that such a ‘sweet’ looking animal can be so ferocious – with sharp teeth puncturing the syringes but we were keen to get her to take a good feed of milk before offering tiny fish. A visit to the fishmonger meant that we had some tiny fish to tempt her a couple of days later and they were quickly consumed!

Nothing was seen of the other cubs despite the badger group walking the area and then, a week after the first cub was found, a second cub was seen on its own in the nearby area. Charlotte decided to drive there straight away even though she was just returning from collecting release equipment from another release site. With a volunteer from Secret World, they went up and spent the entire night with heat seeking binoculars to see if they could find the cubs. By 8 am there was no sight of them then, just as they were talking to someone, one of the cubs came out towards the lake. Running full pelt both of them managed to catch the cub in a net. It was really thin and dehydrated. Jubilant that they had managed to find the cub, they quickly returned to the centre and gave fluids. The cub responded and looked stronger by the evening but sadly, relapsed and died from organ failure later that day. The third cub must have already died as it was never seen again.

Sadly the single cub will probably have to be reared on her own, unless we can a find a cub of similar age to put her with. Sometimes despite the dedication of everyone, we don’t always win the fight. For advice and help ring 01278 783250