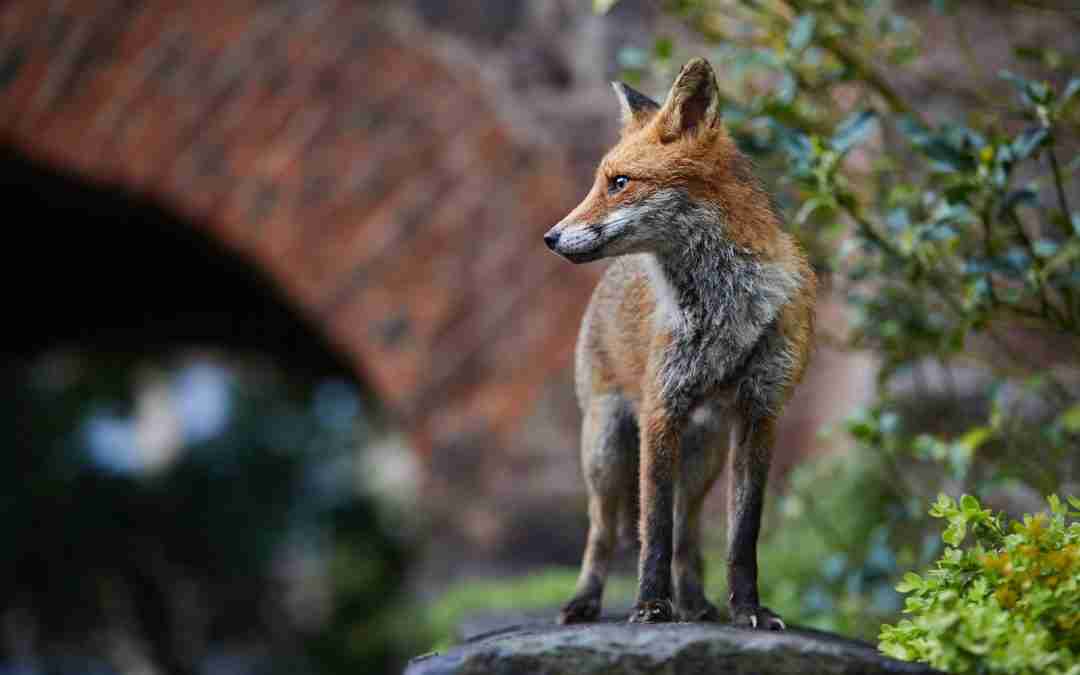 Many of you may remember reading about the story of Eva in our Autumn 2021 newsletter, we were so pleased to hear that a photograph starring Eva has been nominated for the Wildlife Photographer of the Year 58 People’s Choice award. The image ‘A fox’s tale’ shows the injuries Eva had sustained from plastic fencing while living in Bristol. The story of Eva’s trial and tribulation highlights the problems that wildlife in the UK face daily. In honour of Eva we are telling her story again, if it can help spread awareness and prevent the suffering of other wildlife then we are doing our job.

We first heard about Eva in March 2021; a phone call was received about a fox in Bristol that was tangled in netting. Eva was frequently spotted in a public park, having been seen with netting around her since the previous November. The thick plastic netting often used around building sites had begun digging into her skin and was producing wounds like if Eva had been caught in a snare. It must have been very painful! Sending two response drivers to Bristol to investigate we discovered that Eva was a young vixen, one of last year’s cubs.

Eva was incredibly nervous and would not come close enough to be caught in a net. We became aware of a local wildlife photographer called Simon Whitham who had been trying along with others for several months to gain Eva’s trust. Many kinds of capture had already been tried but Eva’s cunning nature meant she had manged to evade every attempt. A plan was devised to use a large net laid on the ground with a long piece of rope threaded around the edge. The rope was thrown over a tree branch and the end hidden out of sight. Now here comes the clever part, a feast of food was laid out to encourage all the resident foxes to come and feed safely, this allowed Eva to feel comfortable. As soon as Eva joined the banquet the rope was quickly pulled and luckily Eva was caught. Such a relief as it had taken 5 months to catch Eva!

Our response driver sprang into action and drove her straight to Zetland Vets in Bristol. Eva was anaesthetised, the netting removed and her wounds cleaned. Eva then began her journey at Secret World, receiving three weeks of rehabilitation. Here she received weekly wound checks with our vets. Eva was a joy to work with, normally foxes do not cope well in captivity, but Eva remained calm during her time with us. Perhaps this was due to her living in Bristol and being used to the busy hustle and bustle of people?

Once Eva’s wounds healed, she was able to be released back into the area she was rescued from. It is important that we release adult animals back into the area they were rescued from as they already have a territory and know where to find food and water as well as being familiar with the other animals in the area. We were so pleased to see Eva being greeted by her sister.

Just six months later we heard that Eva had been found dead, having been hit by a car. Eva’s remarkable but incredibly sad story highlights all too well the problems faced by British wildlife. Please look out for wildlife in your area and if you do spot any injured wildlife ring Secret World or your local wildlife rescue.

‘A fox’s tale’ was photographed by Simon Whitham during the time he spent trying to rescue Eva. If you would like to vote for ‘A fox’s tale’ for the Wildlife Photographer of the Year you can do so by following the link below: