This week at Secret World we have had a lot of birds through our doors, mostly pigeons. On Tuesday alone we had 16 admissions, of which 10 were pigeons. 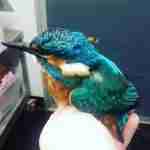 Another bird in need of our help was a Kingfisher. These easily stressed birds are a rare visitor to Secret World with just 3 admitted so far this year. This patient had been brought in after flying in to a window at a house in Chew Magna. The homeowner saw the animal was distressed and did the right thing by bringing to our centre to be assessed. Luckily, the kingfisher was suffering only from a slight head trauma after hitting the window. Animal carer Dan Bryant who was responsible for assessing the kingfisher said “We now need to test fly it in one of our flight aviaries, and if all goes well then we can release it back in to the wild”. 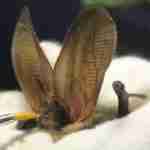 One success story this week is a long eared bat, who thanks to the quick actions of a member of the public and the care it received at Secret World will take to the skies again. The adult bat, which would not normally be found on the ground, was spotted lying flat in a car park in Highbridge by workers at nearby Eaton Controls UK who then promptly called Secret World to seek advice. One of our volunteer response drivers was sent out to pick it up and bring it in to us. When it arrived the bat was found to be fatigued but otherwise in good health. Once it had been given the once over by our animal care staff it was placed in an enclosure to build its strength up. The bat will be released in to the wild as soon as it is back to full health. Did you know that all bat species, their breeding sights and resting places, are protected by law. Some species of bat are relatively common, including the brown long-eared bat. But some, like its grey long-eared cousin are much rarer. The bats huge ears give it exceptional hearing, it can even hear a ladybird walking on a leaf!

Finally we have an exciting event coming up next month that we hope you will be a part of. Yes – the fun and entertainment of the circus is coming to Secret World! On 13th October we will be presenting Cirque de Secret World, a circus themed charity ball at the Webbington Hotel in Loxton. We are inviting friends, supporters and wildlife lovers to our biggest fundraising event of the year, which will be hosted by BBC broadcaster Mike Dilger. Every year we host a charity ball with proceeds going to the continued care of injured, sick and orphaned wildlife. The event will include two auctions- one silent – with over 100 items on sale plus a three-course meal. There will be a magic show between courses as well as a casino for the adults to enjoy. After the meal, guests will be able to burn off their puddings on the disco dance floor and be entertained by a David Ford tribute act until the early hours. To buy tickets visit our website.