Here at Secret World Wildlife Rescue we help every poorly animal that comes through our doors with the aim of releasing it back into the wild. This is why we were so pleased to be able to release a group of tawny owls, who had beaten the odds to survive and fly free. This group included Tiny Tawny Tim and Tiny Tawny Tom, as well as Otis, who has featured in previous blogs.

Tiny Tawny Tim arrived after being found grounded in Sampford Arundel, Somerset. Tim was soon joined by another tawny owl named Tiny Tawny Tom after he was found with torn claws in Yate, South Gloucestershire.  Otis was rescued by Secret World earlier this year after becoming matted with fly eggs.

The five owls were taken to Gloucester and placed into a soft release pen. When they are ready to be released, the doors will be opened and all the birds will be able to fly free. It is so lovely to see them have their happily ever after ending! 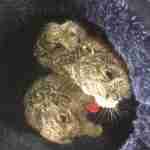 Four tiny baby Leverets were brought in to us after being found huddled next to their dead mother. This sad scene was found by a member of the public who was walking his dog when he suddenly noticed his companion had one of the tiny hares in his mouth. Shocked, he managed to release the leveret uninjured and after having a look round he found the body of an adult hare with the leverets next to it. The kind rescuer was passing Secret World that day so was able to drop them in to us. They were initially assessed and are now being looked after by animal carer Marie who is feeding them regularly to build up their strength.

We also had a Gannet in who was found way off course in Shapwick. These large wondering sea birds are not usually found in land but this one was spotted stranded on a driveway in the Somerset village. The member of the public who spotted the young bird called us, and we sent a volunteer response driver to pick him up. Upon arrival he was assessed and found not to be injured but was a bit thin, so he was fed through a tube to get his strength up and then placed in a pen to get some rest. As soon as he was fit enough he was transferred to West Hatch RSPCA who had other birds he could mix with while they get ready to be released back to the sea.