The Wild and Deadly Show

There were lots of smiles (and a few scared faces – mostly from the parents) onsite this week as we held our first Wild and Deadly Wednesday of the Summer! Nick Wadham hosted his special Wild and Deadly show, where he showcased a variety of creepy crawlies. A particular highlight (for the kids at least) was when they got to nominate their parents to hold the tarantula! We also ran some great craft activities, and visitors had the chance to see our resident animals, including the birds of prey, foxes and badgers. If you missed it, and think that this sounds right up your street, come along on the 15th or 22nd August, 12 – 4pm. It’s £4 for adults and £2 for children, and promises to be a fun afternoon out for all ages! 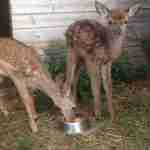 At the moment we have 3 lovely fawns onsite: Sweetpea, Daffodil and Jasmin, who are being looked after in our fawn paddock. Sweetpea is a red deer, who was found at the side of the road. She had stomach problems and animal carers were concerned about her sight. After treatment and being bottle fed Sweetpea improved, and was put in the fawn paddock with Daffodil, a fallow deer that had been hit by a car. Daffodil had head, neck and leg wounds, and when found it was touch and go whether he would survive. However he surprised staff with his recovery and fight to survive. The last deer, Jasmin, a roe, was found lying in a ditch at the side of the road. Fawn is usually the term we use for baby deer but in fact the only one that is truly a fawn is the fallow. The Red is called a calf and a roe is called a kid – however fawn is the term usually used as the accepted name for a baby deer.

These young deer will remain with us until the autumn where they will be taken to a release site monitored by the land owner. This will the responsibility of Jamie Kingscott, who is the Wildlife Release Manager at Secret World. We are always looking for release sites for many different species so if you have land that may be useful, please ring Jamie on 01278 783250 or email Jamie.Kingscott@secretworld.org.

This weekend our resident birds of prey will be out in Weston-super-Mare, on the Grand Pier. Why not pop along and meet them. You will be able to chat to our bird handlers all about them, and find out how they came to be at Secret World. Each owl has an interesting story to tell!