We have been engaging with lots of our younger supporters this week, both on and off site. This is so important to us, as these children are the future, and by teaching them to appreciate and look after wildlife we are protecting it for years to come.  We had two well attended Wild Academy sessions, focusing on birds of prey, and reptiles and amphibians. Our Wild Academy workshops encourage children to find out about the natural world around them through games, crafts and outdoor activities. The children who attended certainly seemed to enjoy themselves! We also attended an organised play day in Apex Park, where we made over 250 seed bombs with children! 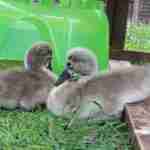 This week we have had a lot of birds in, including two cygnets who were abandoned by their parents. The two tiny birds were found alone as their parents had flown away.  They were too small to fly as their wing feathers had not developed and they were unable to get off the ground.A member of the public found them, and delivered them to us, where their condition was assessed. Both birds were found to be in good health, just too young to be left out alone. They are now flourishing in one of our outside paddocks, where they will stay until they are stronger and their flight feathers have developed. Once this has happened a suitable release site will be found for them, one where there are other swans that they can join. 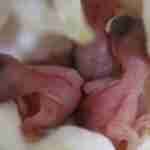 Another happy story this week involved four tiny sparrows. We had a call from a member of the public who found three tiny sparrows who had recently hatched, and one cracked egg on the ground. The recent rain had destroyed their nest, leaving them to fall to the floor. They came in to us, where they were put into an incubator. The three birds were so tiny they were not expected to survive, but miraculously they did. In another twist of fate the cracked egg is now hatching, meaning the last bird will soon be joining its siblings. The sparrows are in our hospital room, where they are receiving round the clock care and hourly feeds. At this time of year our hospital rooms are full of tiny birds, who are all casualties of the weather. Many arrived during the hot spells, when they fell out of their nests due to the heat. Thanks to our dedicated animal care staff and volunteers who are caring for them all!