It has been very hot for the last few weeks, with the UK experiencing a heat wave. This has been especially hard for wildlife, and we have seen an increased amount of animals coming through our doors. The lack of rainfall has left many unable to keep cool or find food. Gulls in particular have been suffering, as hot surfaces and a lack of shade are causing many of the birds to be brought in with severe sunburn on their feet. We currently have 237 gulls on site, and that number could easily rise if this weather continues. This story has given us quite a bit of media coverage, and you may have seen us on Countryfile Diaries, ITV Westcountry or Points West.

To help the struggling wildlife the best thing you can do is to put fresh water out each day for animals and to consider feeding them until there is enough rain to enable them to forage for themselves. Both adults and young alike are struggling to find sufficient food and water so extra provisions at this time can be a life saver. 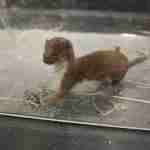 There was a happy ending for one of our more unusual animals this week. We received a call from a member of the public in Weston-super-Mare whose cat had caught a juvenile weasel. Luckily they were able to bring it in to our centre in Highbridge for assessment. The male weasel, who has been named Ron, had a number of puncture wounds caused by the cat’s teeth, and so animal carer Dan Bryant put it on a course of antibiotics to help them heal. Weasels are not animals we see often at Secret World. Since 2011 only 17 have come through our door needing help. It is not unusual for weasels to be caught by cats. However this situation is slightly unusual as cats usually go for weasels who are weak or injured as they are easier to catch. Ron was healthy and so he was probably caught because he is young and let his guard down. The cat must have been very brave, as Ron was a very feisty little fellow! After the antibiotics and a few days of rest Ron was soon up to full health and was released back into the wild. 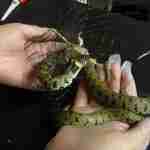 Another success story this week was little Moss, a grass snake that got caught in netting in a garden in Berrow. One of our volunteer response drivers was dispatched to the scene and they managed to cut Moss free. He was brought in to our hospital room with some of the netting still tight around his body. Then began the delicate operation of removing the netting and animal carer Sarah Tingvoll used nail scissors to patiently cut him free. Once the netting had been removed Moss perked up immediately. While assessing him Sarah noticed that he had an old wound, which had caused his scales to become slightly dislodged. As a precaution he saw our vet from Quantock Veterinary Hospital. Grass snakes are one of just 3 of our native species of snakes. During this warm sunshine, they can be spotted basking in the sun near their favourite ponds.

Keep cool, and don’t forget that dish of water for the wildlife!