There’s been excitement onsite this week as we appeared in 3 episodes of Countryfile Diaries! The film crew spent 4 days with us a month ago and followed our work, from animal admissions through to the hospital rooms, rehabilitation and release. The stars of the show were definitely Fred and George, our badger cubs!  They charmed the film crews, and probably a lot of the people watching! Viewers also saw Marion, our tiny fox cub and her friends, lots of birds in our hospital room, and Henry the hedgehog going back to the wild. Did you watch the show? If not you can catch up on BBC iplayer, we are in episodes 2, 3 and 4. 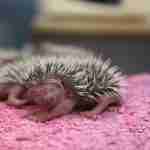 The first hoglets of 2018 arrived this week, and they really are tiny! The four of them were found in a garden crying for their mother, who hadn’t been seen for a long time. Ranging from 19.5 grams to 25 grams in weight  they will need feeding and nurturing until they get stronger.

Our release manager Jamie and release coordinator Charlotte rushed to the aid of a trapped baby badger yesterday. He was taken to the vets as he was severely de-hydrated having been trapped all night crying out for help. We always have themes for naming our badger cubs, and this year a public vote chose the theme of Harry Potter characters. So this little cub has been called Nevil. Please send him your best wishes for a speedy recovery.

Back to the wild!

And finally we had another successful release this week, which is the reason we do what we do. This Canada goose was admitted after being hit by a golf ball on a local course. After pain relief and a stint of rest and rehabilitation, he was released back into the wild. On his return he was greeted by his mate and family. We do love a happy ending!