I never fail to be amazed at the generosity of the public! Here at Secret World we rely on people to support us, to enable us to care for the hundreds of animals each year that need our help. One thing that can be very expensive is feeding all our casualties. At the moment we have lots of fox and badger cubs on site. These require specialist puppy milk, and then when they are weaned they are fed puppy food. We put a request out to see if people could donate some tins, and were amazed by the response! This week alone we have received 384 tins and 624 pouches of puppy food, through our Amazon wish list. Thank you so much to everyone who donated, we are so grateful, and so are the animals! If you want to help us buying us something from our Amazon wish list is a quick and easy way to do so. You can see our wish list by visiting https://goo.gl/ppMw6A. 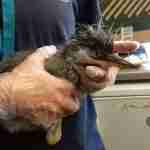 This week seems to be the week of Heron’s; as we had two arrive at our centre. One, a baby, had fallen out of its nest in Weston-super-Mare. On arrival he was assessed and found to be in shock, with no other obvious injuries, and was given fluids and weighed. Our animal carers then made the decision to transfer him to the RSPCA West Hatch centre in Taunton. In this case, the site is better suited for this young bird and the heron would be with others of its kind and be able to socialise. He was taken there the same day by one of our volunteer response drivers. It is important for us at Secret World to work closely with other animal centres, including RSPCA West Hatch, to ensure that the animals get the best treatment and rehabilitation support. Depending on capacity, where the expertise lies and appropriate facilities, animals are sometimes moved between wildlife centres in the interests of that individual animal and to give it the best chance of survival. 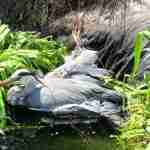 The second heron had quite a traumatic story. The owners of a pond in Spaxton had been advised to protect their fishpond from a visiting heron by surrounding it with fishing line. However rather than discouraging the heron it had resulted in him becoming entangled and being unable to free himself. Our response driver Graeme managed to free it and transport it to Secret World, where our animal carer Dan worked to cut away the rest of the line. The heron was uninjured and will be released soon.

Finally we are ending this week with some exciting news. A few weeks ago we hosted a crew from Countryfile Diaries, who spent four days filming with us following casualty arrivals and the feeding of orphaned animals.  We feature in three episodes, which will be shown on Tuesday 29th May, Wednesday 30th May and Thursday 31st May, at 9:15am on BBC One.