As is always the way at this time of year Secret World is full of animals needing our help. Many of these are orphans who have been found alone, crying and hungry, with no sign of their mother. At the moment we have around 30 fox cubs and 7 badger cubs on site! This certainly keeps our animal carers busy, but there is nothing more rewarding than knowing you are helping to make a difference to these beautiful creatures, and eventually giving them a second chance back in the wild. 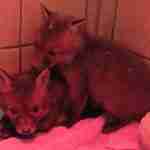 We are very lucky here that we have a lot of dedicated people supporting us, not just those within our own charity. Members from Devon Badger Group went above and beyond to help two small foxes in need, ensuring they were bought to us for the care and attention they needed. The group found a lactating fox who had been shot, and they were concerned that there may be cubs starving. After going back that evening they found a small fox cub, who they tried to capture, but it escaped. The group set up a trap camera and found that there were actually two fox cubs, both in poor condition. They managed to capture one cub, and going the extra mile, they camped out for a week to capture the second. Both Harry and Houdini (as they have been named), are now safe with us, and are doing well. 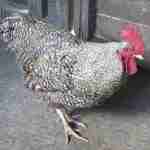 We had an unusual animal arrive at our centre recently. We don’t usually accept domestic animals, instead focusing our attention on British wildlife, but when Rodney the Rooster turned up in need of help we couldn’t turn him away! He was found by a member of the public sheltering in a garden in Burnham, having narrowly escaped the unwelcome attention of a fox. After failed attempts to find his owner he was given to us to look after. We are now looking for a new home for him. Founder Pauline Kidner said: “We are hoping his owner may come forward or perhaps someone would like to give Rodney a new home. He really is rather majestic.”  If you can help call us on 01278 783250. 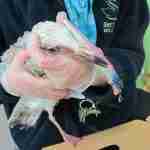 The best part of working at Secret World is the success stories, where we can see the real difference we make to these animals. This week we had a brilliant outcome when a juvenile gull, who had been caught by fishing hooks, was released. When the gull arrived at our centre it wasn’t looking good for him. The poor thing had three fishing hooks, one in its mouth, one in its foot and one in its wing! We managed to get the hooks from the wing and the foot out, but had to send the gull to our vets for them to remove the hook in its mouth. However this gull was a very determined thing, and made a great recovery. This week we were able to release him back into the wild, and it was so lovely to see him flying free, enjoying his freedom!