Well, after a very wet Easter it looks like Spring has finally sprung today!

We were very disappointed that we had to cancel one of our Family Fun Days over the Easter holiday. Unfortunately all the rain caused our field to flood, leaving us with no car parking.  Thanks to everyone who braved the rain to attend on the Friday, and for understanding why the event had to be called off. Our next big event is our Summer Party, on August 27th, and fingers crossed the weather will be much kinder to us then! 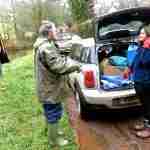 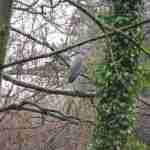 The heron in a tree

It has been a good time for releases, with two injured birds being given their freedom. Do you remember the heron, who we mentioned in our previous blog? Well, he was released by the very kind people who found him. Mr and Mrs West took the heron into their kitchen and called us for advice during the heavy snow last month. He was weak and cold, as he had been unable to find food. After some food, warmth and TLC by our animal carers he thrived, and went from a concerning 1kg to a more healthy 1.5kg. When released it instantly flew from its box to a high tree top, to wait until we had gone. Animal carer Sarah left its feeding bowl nearby with a hearty meal to tide it over.  With luck it will soon be catching its own! Mr and Mrs West will be keeping an eye out for it over the next few days. 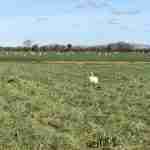 Freedom for the swan

We also said goodbye to one of our swans. He was picked up by one of our response drivers cold and weak, and was treated in our hospital room. When he was back to full health he was transferred to our pre-release pen, where he could be outside and have a pond to swim in, to prepare him for life back in the wild. Volunteers Graeme and Vicki took the swan to a site where there was another group, and were delighted to see him accepted into the fold! 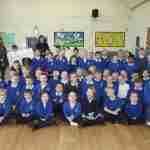 And finally look at this lovely photo from Windwhistle School Primary! The children have been busy fundraising for us after our Learning and Engagement Officer Ellie visited to talk about hedgehogs. The children, all from Year 2, ran an after school shop to sell items they had made including cakes, clay hedgehog sculptures, book marks (all hedgehog themed). They made a fantastic £105! We would love to hear from any schools interested in fundraising for us, or having a visit from Ellie. You can email her at ellie.wallace@secretworld.org.