This week got off to a great start as we released Jammy, our gull. His story caused much amusement between staff and even attracted the attention of the local news. Jammy was found apparently covered in ‘blood’. While assessing him animal carers Dan and Katie were very surprised to find seeds in the ‘blood’. After more investigations they discovered that it was strawberry jam! It turned out that Jammy had a very sweet tooth, and took a liking to a vat of jam near a dessert factory! He was cleaned up and released on Monday. Another happy ending for an animal in our care! 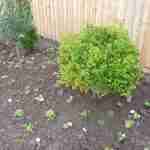 Brightening up the garden

Our green fingered volunteers have been busy planting flowers to make the site look more attractive. We were lucky to have a donation of some lovely flowers and as you can see they really brighten up the Bluebell Barn garden! We can’t wait until Spring now when the days are warmer and we can get out and enjoy the site at lunchtime.

This week it was International Woman’s Day. We are very fortunate to have lots of incredible women working and volunteering for us, who go above and beyond to care for any British wild animal that needs help. We also have some inspirational female patrons, who have supported us for a long time. These are Michaela Strachan, Jilly Cooper OBE, Sarah Fisher, Rhianna Pratchett and Valerie Singleton OBE. On behalf of Secret World thank you to all the amazing women who keep the charity going! 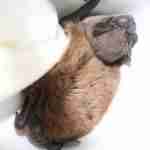 Animal carer Sarah had a surprise this week when a bat she was caring for gave birth! The pipistrelle bat has been in the care of Secret World since December and  while she was recovering, staff were surprised by how many mealworms she was eating – double the amount for a bat her size and sex. Bats have delayed fertilisation and only fertilise their eggs when the weather is favourable. It is thought that the bat was pregnant when she came in and being kept in a warm vivarium triggered the fertilisation. Once they give birth, bats keep the baby tucked under the wing hidden from view, so it was a lovely surprise to see a baby bat under there! Mother and baby will stay with us until April and we will take them to a flight pen before releasing them. The baby will need  to learn to fly and self-feed from live food and the mum will need to build strength back up. 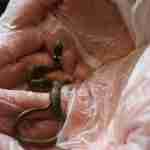 And finally, how many of you are scared of snakes?! It’s a pretty common phobia! But I doubt many of you will be scared of Atom, the baby grass snake we had in this week. When curled up he is about the size of a 50 pence piece, and was found hiding in a suitcase! He will be kept in a warm vivarium onsite until the warmer weather, when we will release him.